Will Keeping a Separate Bank Account Protect My Assets? 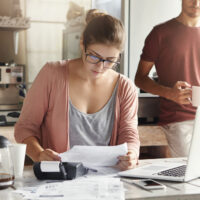 Many couples who get married decide to retain separate bank accounts, even if they do open a joint account to pay for living expenses, such as rent and utility costs. While this may seem like it would simplify the property division process upon divorce, the reality is that this is not always the case, so if you are planning on getting married or are already married and have questions about your right to certain assets in the event of divorce, you should consider speaking with an experienced Fort Lauderdale property division lawyer who can advise you.

Florida is an equitable distribution state, which means that all divorcing couples are required to divide their marital assets fairly. For this reason, determining what constitutes a marital asset and what qualifies as separate property is extremely important to the property division process. Generally, marital assets are those that are acquired by a couple during the course of a marriage, so just because two spouses kept their accounts separate does not necessarily mean that the contents of those accounts will not qualify as marital property. In fact, in all likelihood the income of both spouses will be characterized as marital property, as long as it was earned during the marriage.

Separate property, on the other hand, is made up of assets that either party owned before the marriage took place. This means that if the parties came into a marriage with their own separate accounts, the funds that were in those accounts at the time of the marriage would probably qualify as separate property. If, however, those funds were commingled with the couple’s other funds, or increased in value during the marriage due to rising interest rates, then those assets would most likely also be considered marital assets and would need to be divided equitably.

Inheritances are one of the few assets that, when acquired by only one spouse during a marriage, can be characterized as separate property upon divorce. In these cases, a party could retain the entire amount of the inheritance for him or herself after divorce, but only if the funds were kept in a separate account and kept free of commingling.

Ultimately, keeping funds in a separate account during marriage does not ensure that those assets will remain in the account holder’s name after divorce, so soon-to-be married couples should consider other means of protecting their property. Entering into a premarital agreement is probably the best way that two parties can protect their assets from division if the marriage fails. However, those who do not enter into a prenuptial agreement can still take steps to protect their property by drafting a postnuptial agreement after the marriage has taken place, in which both parties claim certain assets. Finally, couples who do not wish to take either of these routes are encouraged to take stock of their assets prior to marriage by saving copies of all financial statements, which can play a critical role in determining which assets and debts were brought into the marriage in the event that the marriage is not successful.

To speak with an experienced property division attorney about protecting your own assets during divorce, please call Sandra Bonfiglio, P.A. at 954-945-7591 today. You can also reach a member of our legal team via online message.