The Five Ways To Establish Paternity In Florida 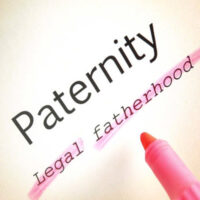 How Long You Have to Establish Paternity

Florida has a long statute of limitations for filing paternity actions. Basically, a father who wishes to establish paternity of a child has from the birth of the infant until the child reaches the age of 18 years old to file a paternity action. Most fathers, however, are encouraged to file earlier, to give them a better chance of forming a strong bond with their child and providing that child with as much financial support as possible.

When a child is born to a married couple in Florida, then the husband will automatically be deemed the child’s legal father. In these cases, the fathers need not take any further action to establish paternity, but will  have the right to visitation and the obligation to financially support the child.

Paternity of a child can also be established if a child’s mother and father, although unwed at the time of the child’s birth, decide to marry at a later date. Those who take this step will, however, need to formally update the child’s birth record upon the marriage.

Establishing paternity doesn’t always involve a fight. Instead, parents can establish paternity of a child via voluntary acknowledgment, which doesn’t require marriage or the filing of a lawsuit, but only the completion and signing of the proper forms and parenting plan.

An order establishing paternity can also be put in place by a judge, which is often necessary in cases where one of the parents is denying paternity. In these situations, the court will require genetic testing to determine paternity before going on to establish a time-sharing schedule and child support order.

Finally, it is possible for parents to establish paternity with the use of genetic testing, but without having to go to court. All of the parties will be required to provide a genetic sample, which will then be tested to see if the man is the child’s biological father. If the tests reveal a familial relationship, then the Department of Revenue will issue an Administrative Order of Paternity and notify the Florida Bureau of Vital Statistics to change the child’s birth certificate.

There are a lot of benefits to establishing paternity of a child, including giving the child access to a family medical history, ensuring that a child receives financial support, and helping to establish a parent-child bond. Not everyone will, however, go about establishing paternity in the same way. For help, call dedicated Fort Lauderdale paternity lawyer Sandra Bonfiglio, P.A. at 954-945-7591 today.