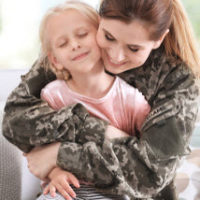 Going through a divorce is a difficult process for most couples. This is especially true, however, in cases where a couple has children and one or more of the parties is an active member of the military, as the schedules of a military parent often affect his or her ability to exercise parenting time. This is true even when the party isn’t officially deployed, but when deployment does occur, a parent will usually be unable to see the child at all or even to consistently communicate with him or her. In these cases, having an alternative child custody arrangement in place is key to protecting the child’s best interests, while also preserving the deployed parent’s rights.

Under current law, Florida allows courts to issue temporary modifications to custody arrangements when a parent is deployed if doing so is in the child’s best interests and the military parent’s ability to exercise parenting time will be materially affected. Unfortunately, with the exception of this provision, Florida law does not address all of the custody issues faced by military parents. However a new law, which is set to go into effect on July 1st, attempts to resolve this by providing a more comprehensive approach to managing child custody during deployment. If you are a divorced military parent and want an explanation of how the new statute could affect your own parenting rights, it is important to speak with an experienced child custody attorney who can advise you.

One of the most difficult aspects of deployment for many military parents is the limited opportunities that they will have for communicating and interacting with their children on a day-to-day basis. One way to address this problem is to designate a family member who can temporarily fill parental duties while the parent is deployed. This is permitted under current law, which allows military parents to designate another family member to exercise their parenting time while deployed. However, this law is limited and fails to provide other alternatives. Fortunately, the new law, which is known as the Deployed Parent Custody and Visitation Act, is much more expansive and provides specific authorization to deployed parents to:

According to the terms of the new statute, a court can permit the temporary transfer of custodial responsibility to an adult family member, or even a non-relative, if he or she has a close and substantial relationship to the child. However, a higher standard of proof is required before non-relative custodians can be approved. Furthermore, if the parents cannot come to an agreement on this issue, the amount of time granted to the non-parent is limited to either:

These custodial responsibility agreements are temporary, so they terminate when the deployed parent returns, although they can be terminated early if both parents agree or the court orders it.

Call Today for Help with Your Child Custody-Related Issues

If you are a military parent and are concerned about who will retain custody of your child if you are deployed, please call experienced Fort Lauderdale child custody attorney Sandra Bonfiglio, P.A. at 954-945-7591 for a free case evaluation.