Could I Lose My Family Heirlooms In Divorce? 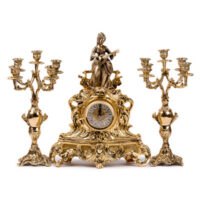 Dividing marital assets often proves to be one of the most difficult aspects of divorce, with many couples wary of losing their personal assets or valuable family heirlooms. Fortunately, there are strict rules in place that can help divorcing couples protect their personal property in the event of divorce.

One of the first questions that a couple will need to ask when trying to determine how an asset will be treated during divorce is whether that property is a separate or marital asset. Separate property is the individual property of one spouse, obtained prior to the marriage. Marital property, on the other hand, is any asset acquired by either spouse during the course of the marriage. This is an extremely important distinction because it is only marital property that can be divided in divorce. All separate assets will remain in the sole possession of the original owner.

Fortunately for many couples, family heirlooms are often categorized as separate property. There are, however, a few factors that could affect whether a valuable heirloom must be divided. When and how the person received the property, for instance, as well as whether the other spouse invested time, effort, or funds into restoring the asset will play a significant role in determining who will retain ownership of the heirloom. If one spouse received the heirloom prior to getting married, then it will most likely remain in his or her possession after divorce. Similarly, if the heirloom was gifted to one spouse by a third party, even if it was given during the marriage, it will be considered a separate asset. This is also true for heirlooms received as part of an inheritance.

If, however, the other spouse used marital funds or made a significant personal effort to restore the heirloom, then it could end up being treated as a marital asset, meaning that the other spouse could have a claim on it in divorce. Heirlooms given by one spouse to another, or property given to both spouses, will also be considered marital property.

If a court decides that a family heirloom is a separate asset, then it will remain in the possession of the original owner. If, on the other hand, the asset is deemed marital property, then it will need to be divided. This can happen in a couple of different ways. One spouse, for instance, may agree to let the other have the heirloom in exchange for another asset of equal value. Alternatively, the couple could decide to sell the asset and divide the proceeds. Which route a couple chooses will depend on the value, both personal and financial, of the heirloom, as well as the parties’ willingness to negotiate.

If you are filing for divorce, you’ll need an experienced Fort Lauderdale property division attorney on your side who can make sure that your most valuable assets are protected. Contact Sandra Bonfiglio, P.A. today to set up a free one-on-one consultation.