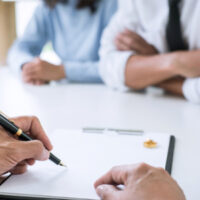 Getting a favorable ruling from a judge during divorce litigation can feel like a win. There could be occasions, however, where despite a clear order from a judge, a former spouse fails to do what he or she is supposed to once the divorce is actually finalized. It is, for instance, not uncommon for former spouses to fail to comply with the terms of a postnuptial agreement. In these cases, having a skilled Fort Lauderdale prenuptial and postnuptial agreement lawyer on one’s side can make all the difference in ensuring that a wronged party not only receives what he or she is owed under the agreement, but also collects any interest that accrued during that time.

When someone fails to perform as legally required under a binding agreement, he or she loses not only the sum that was agreed upon, but also the use of that money that should have been in his or her possession. For this reason, when someone fails to pay what they owe under a pre or postnuptial agreement, the wronged party is entitled not only to the funds owed, but also to any interest accrued during the period of non-payment.

To ensure that a person gets whatever he or she is entitled to under the law from a postnuptial agreement, he or she must make sure that the period of time being used by the court for calculating interest is correct. Courts that use the wrong start date when making these calculations could end up awarding the petitioner too little. In one recent case, for example, an appeals court overturned a lower court’s decision to calculate interest on an unpaid award at the statutory rate from the date that the motion for contempt was filed. Instead, the appeals court clarified that under Florida law, the start date for calculating interest is the date of loss and not the date that the contempt motion was filed. This can make a significant difference in how much a person collects, as contempt motions are often filed long after collection was actually due in an attempt to provide a former spouse with more time to comply with the court order.

Speak with an Experienced Prenuptial and Postnuptial Agreement Lawyer

There are a variety of details that go into getting what a person deserves under a postnuptial agreement upon divorce. For instance, even when a court enters a final judgement regarding a postnuptial agreement or property settlement arrangement, the litigation process may not actually be over, as the parties will still both need to follow through with the court orders. Wherever you are in the divorce litigation process, having an experienced attorney on your side can make all the difference in the outcome of your case. For help enforcing your own postnuptial agreement, please contact dedicated prenuptial and postnuptial agreement lawyer Sandra Bonfiglio, P.A. by calling 954-945-7591 today. We don’t charge for initial consultations, so don’t hesitate to schedule a meeting with our legal team by phone or online message.